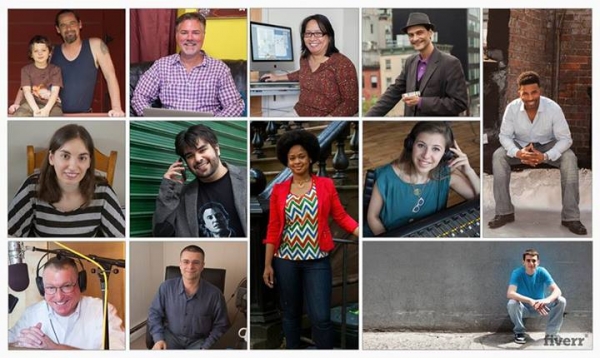 An amazing day all around. Today, I was asked by Fiverr marketing to appear in their latest ad campaign which features sellers in their working environments and stories about their successes. I participated in a photoshoot in Thomas Jefferson Park on the Upper East Side of New York City.

The camera person they sent took pictures in various locations throughout the park and then on the roof of a nearby apartment building for a more urban-esque background which I preferred. The main pic for this post has the collage of pictures which they used in the resulting campaign. You can see me in the top right. The other subjects were a mixture of Top-Rated and Level 2 sellers with a lot of traction.  Later a camera crew was sent to my production studio to get shots of me at work.

Find Me On Fiverr Now!

All of my hard work on Fiverr over the last year and half or so has culminated with me becoming one of the more visible and valued members of their franchise. My promotion to Top-Rated Seller a few months ago has lead to tsunami of purchases from international buyers, requests from Fiverr Marketing to speak on my Fiverr experiences and even offers to appear in short films (more on that later). I cannot express my astonishment and gratitude for all of these amazing opportunities that my participation in the Fiverr marketplace has afforded me.

Bring Unparalled Energy To Your Video, Music Or Photography Project! Get A Quote From Harold Everton Of Everton Media Now!

Harold Everton @EvertonMedia
EvertonMedia My course completion certificate for "Photography Masterclass: A Complete Guide to Photography" https://t.co/XMZSUPpixl via @udemy
Aug 07 • retweet
EvertonMedia That Samsung S10 Is Looking Mighty Sweet! Still Have My Eye On That Pixel 3 Lite Though! https://t.co/pB6GE6AsGD #TeamFlatPhones
Feb 06 • retweet
EvertonMedia RT @GiveMeApps: This #iPhone/#iPad App Lets Your Post Tasks So People In Your #Local Area Can Come Come Straight To You To Complete Them! h…
Jan 29 • retweet